Soliloquy For The Silent- I wrote this on August 24, 2012, four days after Larry Passed Away.

The Photo I'm including here was a shot I took of Larry Sullivan in 2009, in better days, and perhaps, better times.

Later today I will be attending a funeral. I, probably like many, do not like funerals. I...generally do not like being in sad, depressing situations. Thats what I think most funerals are. Also, i'm not particularity a fan of...well..religion or churches.

Lately, much of my life has been a sad, depressing situation, partially of my own faults, my extreme exacting taste, which some my find grating, being one, my self doubt and lack of confidence are also a contributing factor. Many people, close friends and brief acquaintances have offered advice and tips on how best to combat these things, but this is a battle I must fight my self. For those that have had to deal with me, I apologize.

The man that I will be honoring later today was nothing like me. He was a strong, courageous man, and though I did not know Larry Sullivan as well as I would have liked, I knew him to have a smile and determination that could posses a hundred men.

Larry's time working in the FDNY's elite, Staten Island proud Rescue Company 5 saw him battle everything from house fires to car wrecks. Every day he worked, not knowing what he would face, not knowing the outcome, yet he pushed through and carried his head high, proud to represent his company, his department, and his city.

You see, it takes a certain breed of person to not just live in this city, but to thrive, for as Frank Sinatra proudly said, "If I can make it there, i'll make it anywhere..."

Larry Sullivan made it here. He may not walk among us anymore, but he lives inside each and every New Yorker, past present and future. Thankfully, his is one fire that cannot be - should not be extinguished, because his fire has stoked, at least in my mind, a quiet determination to not let my shortcomings own me, but to let my strengths and quirks define me.

Larry, if I become a quarter of the man you were, i'll consider that one hell of an achievement. I'm proud to have been in your presence, to have shaken your hand, and most of all, to have known what a great and excellent man you were, and always will be. 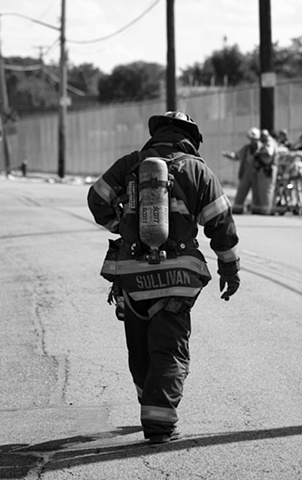