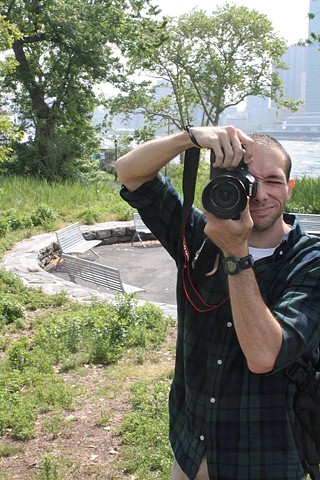 I first picked up a camera as a kid...i'm not sure exactly what age, but knowing I could freeze frame a moment? It Changed me. The camera? It was my fathers Pentax Spotmatic 35mm...one he had brought with him to Kenya in the 60's. I still have that camera, and on occasion I still use it.

Shortly thereafter, I got my own Kodak point and shoot and spent the better part of 5th grade taking photos of everyone around me, not many of them were what i'd call spectacular, but that was how it truly began.

Then, in 1999, I received my first digital point & shoot, an Olympus. That's when I decided to create LCPhotowerx. Ever since, I've taken some type of camera with me everywhere I go, be it my Canon 7D MK II, which I've nicknamed Dorothea(After famed photo Dorothea Lange), or one of the many vintage cameras I collect...and am slowly attempting to restore.

Once I was the a photographer working with the FDNY and NYPD, with my work published in magazines and featured on many local news agencies, including NY1 News and WABC TV. Additionally my work has been seen in museums and on HBO.

A self admitted eccentric, I generally try and keep the crux of my work on the lighter, more positive side.

Much like the A-Team, if you have a photo-related problem, and if no one else can help, you can hire us.